As one of only four agencies appointed to Network Rail’s Event Management Framework, we were excited to be selected for the second year running to deliver their prestigious Partnership Awards.

This is the seventh year Network Rail have run these awards, and a key part of the objective was to improve year on year. We delivered our first ever event for Network Rail in 2014 and client feedback informed us this had been the ‘best year yet!’

Setting such a high benchmark in our first year meant the pressure was on to not only equal our success but beat it substantially!

The event needed to be tailored to an audience of over 450 senior managers, directors and key industry players who mainly comprised males (80%) between the ages of 30 and 60 years.

It was important that Network Rail demonstrated its pride in working with each of its suppliers and celebrated their successes. They wanted everyone to leave the awards feeling positive about Network Rail and its vision, having picked up a sense of where they were heading and how they could help achieve it. 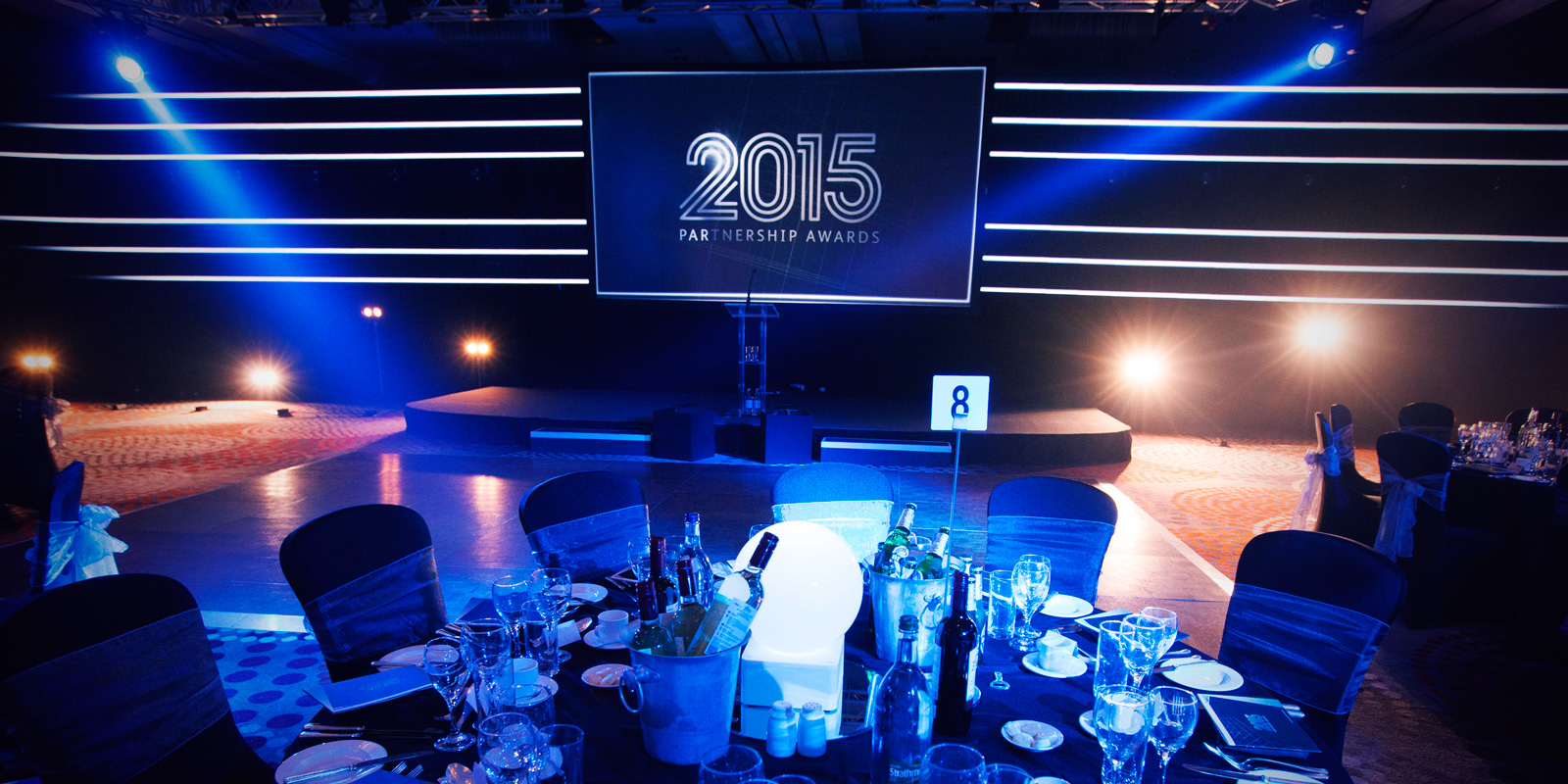 A set and stage to be proud of! Our spectacular design featured a central 5m wide projection screen, flanked by two massive ‘tracks’ of Pixelmesh 12,5 LED tiles extending almost to the edges of the room forming a 26m wide curved backdrop, giving the impression of a seamless run into the central screen from each side.

Our Production team made excellent use of lighting and haze behind the structure to create some stunning (and much commented on) effects, choreographed with the awards opening sequence and winner walk ups.

The scale and curve of the backdrop provided a fantastic canvas for us to utilise projection mapping for a fully immersive experience; drawing the audience in with the curved shape and clever animated content based around Network Rail’s brand and key messages for the awards. Our approach was designed to ensure guests were impressed and surprised at every opportunity.

The span of the backdrop ensured even those at the edge of the room felt involved in the full experience. This was enhanced with the addition of wirelessly controlled LED globe table centres and extensive lighting effects, which built throughout the event towards the finale – the ‘Supplier of the Year’ award, accompanied by a pyrotechnic display. 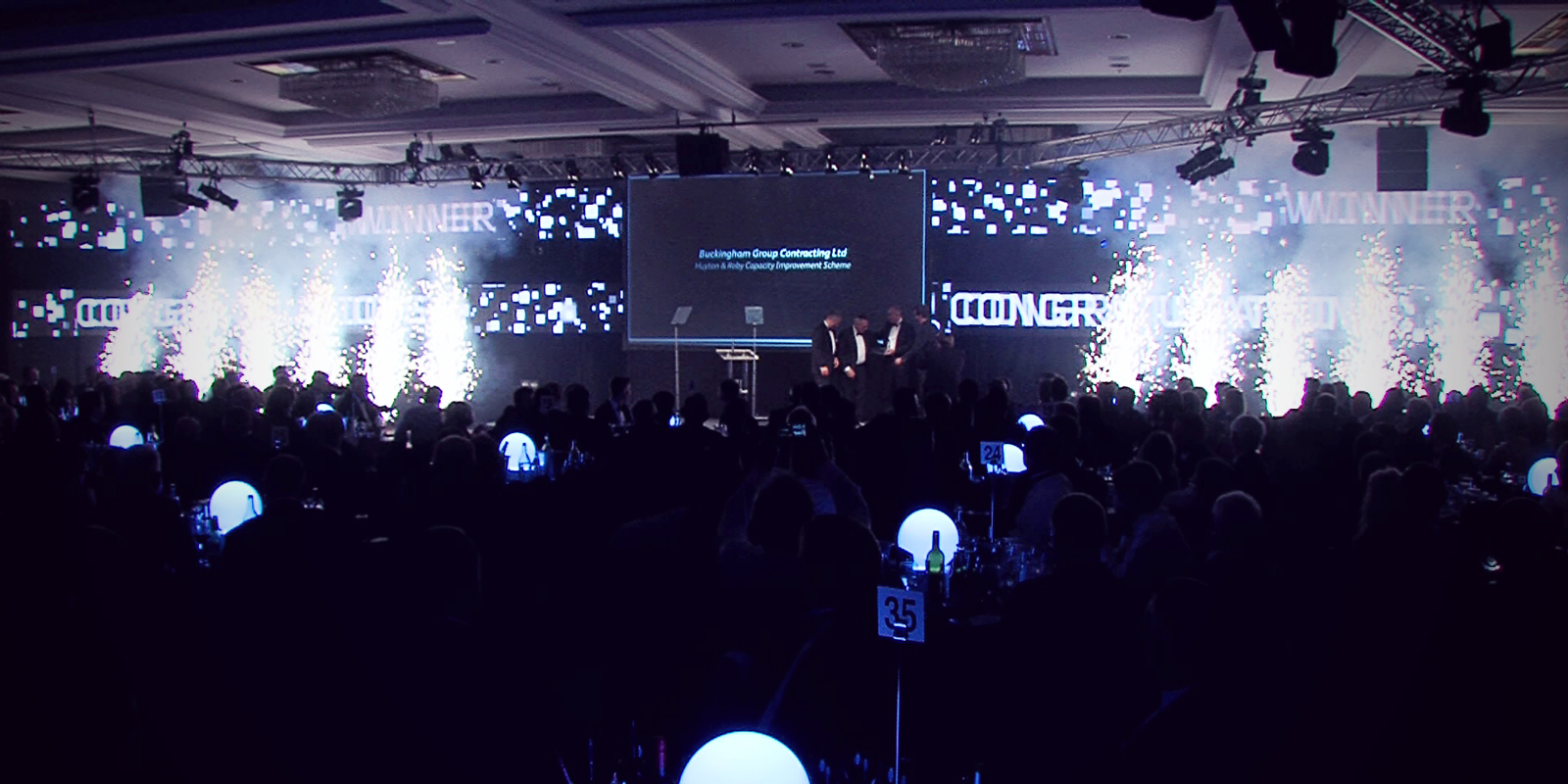 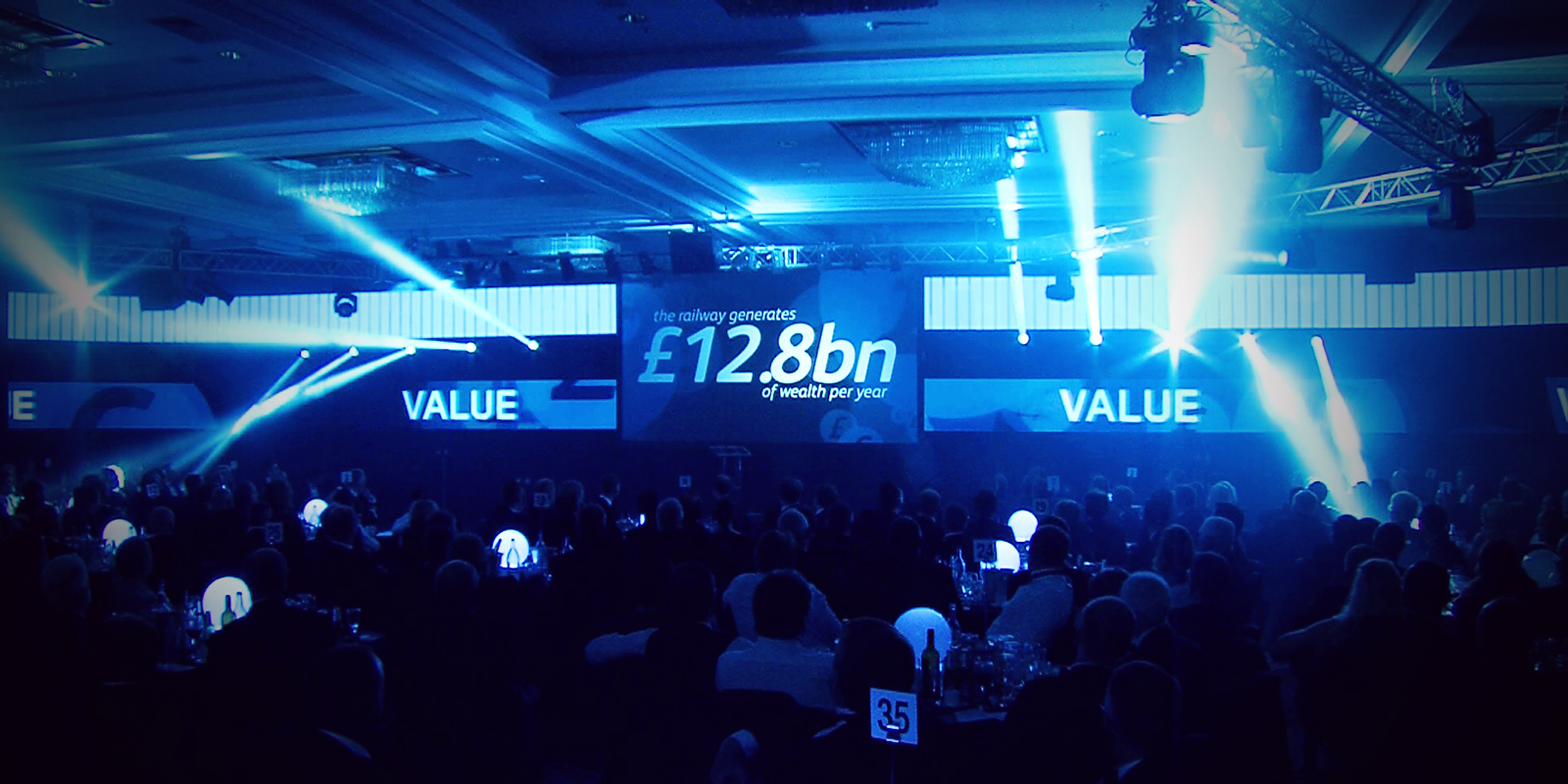 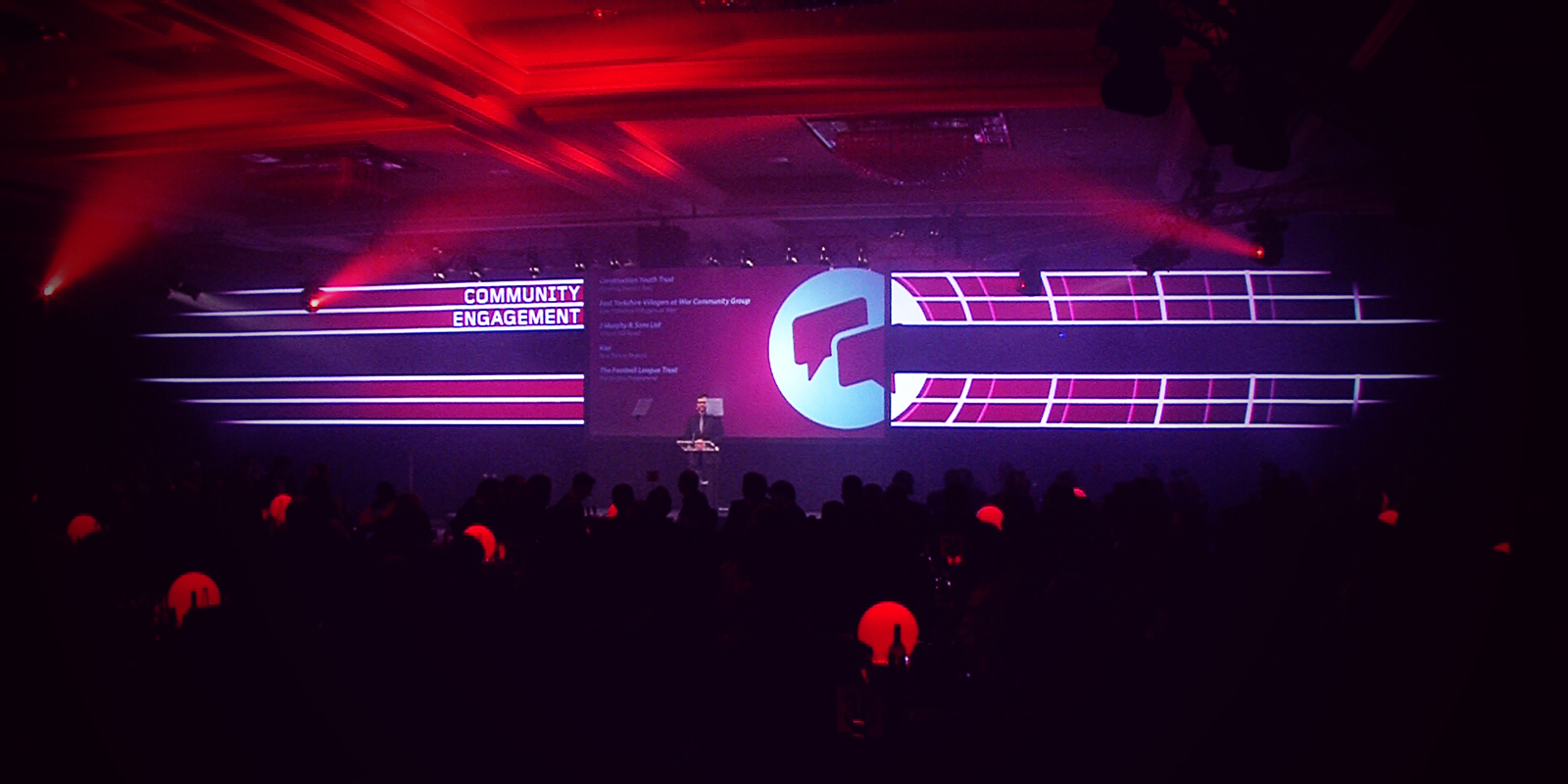 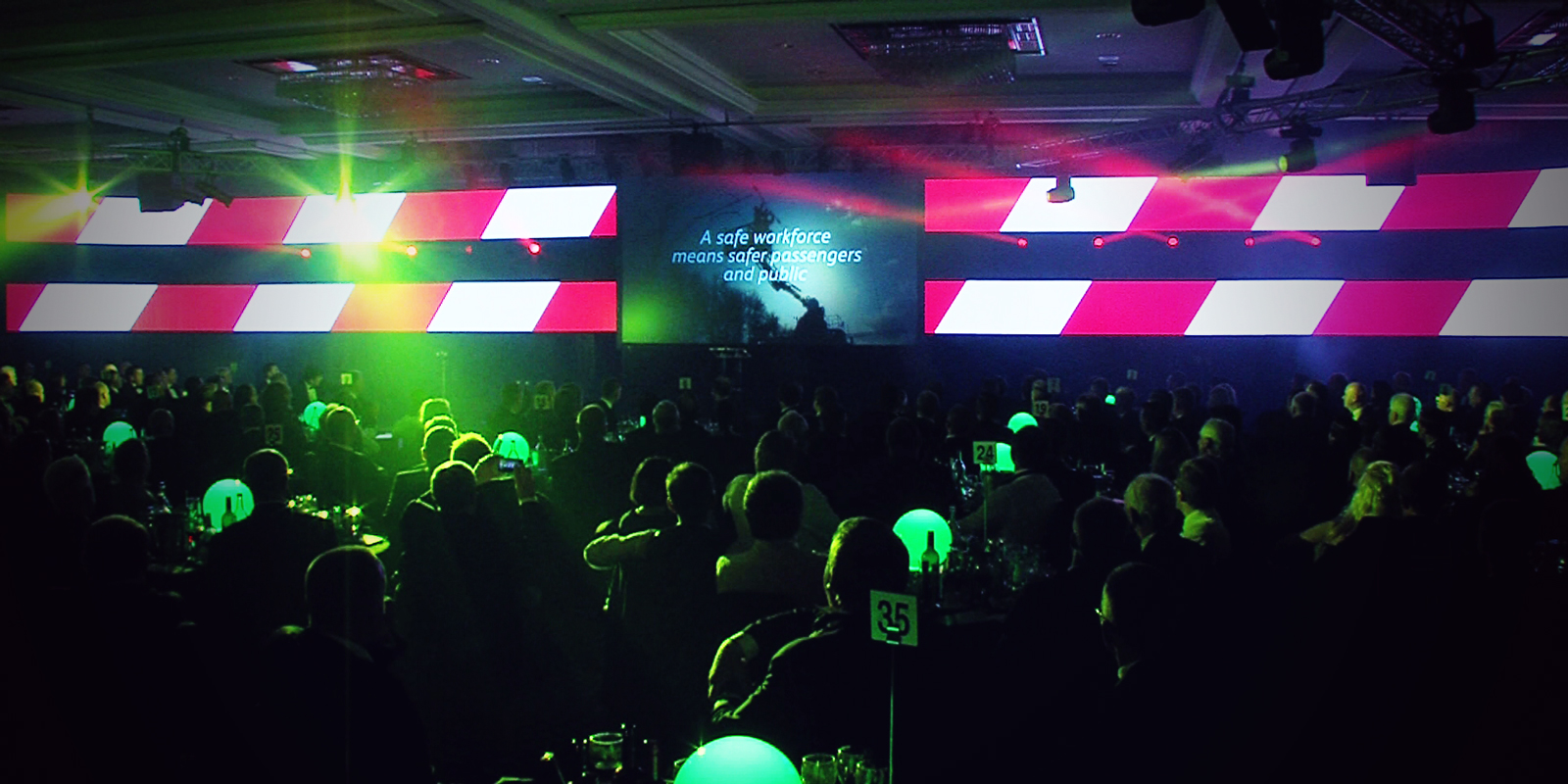 Glasgows’ creative and technical experts provided a complete AV solution including full pre-production and on-site production, overcoming several challenges presented by the venue with regard to the precise rigging required for the projection mapping element.

The synergy of our great relationship with Network Rail is key to understanding their organisational goals, enabling us to deliver event excellence every time.

We received fantastic feedback both during the event and in the follow-up communications, with notable comments on the staging design, on screen graphics and our unflappable approach to dealing with changes and challenges along the way.

What did our client say?

Just wanted to say THANK YOU so much for all your hard work before and on the night. The awards were a huge success and I have had a lot of people say how much they enjoyed the night and how slick they were! I can’t thank you enough. Please pass on my thanks to all the staff that helped make the night a fantastic and memorable event! I look forward to working with you all again soon.
Senior Event Manager, Network Rail